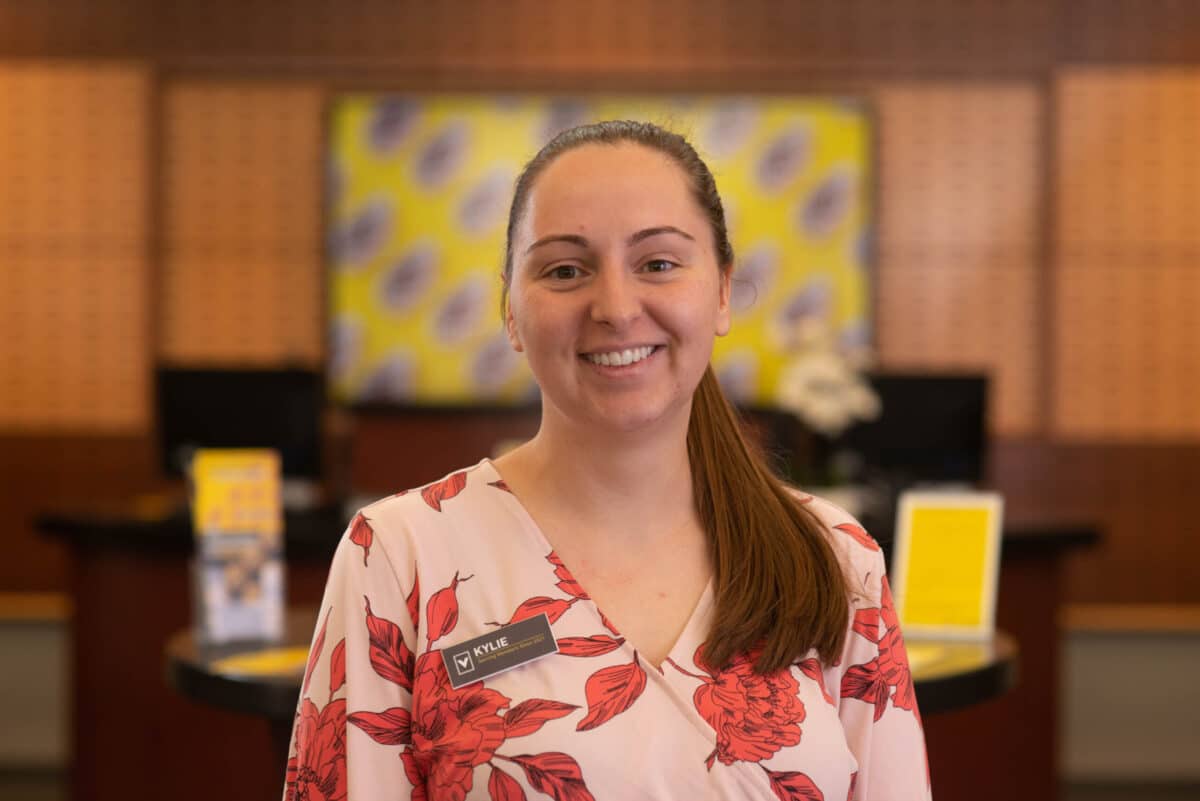 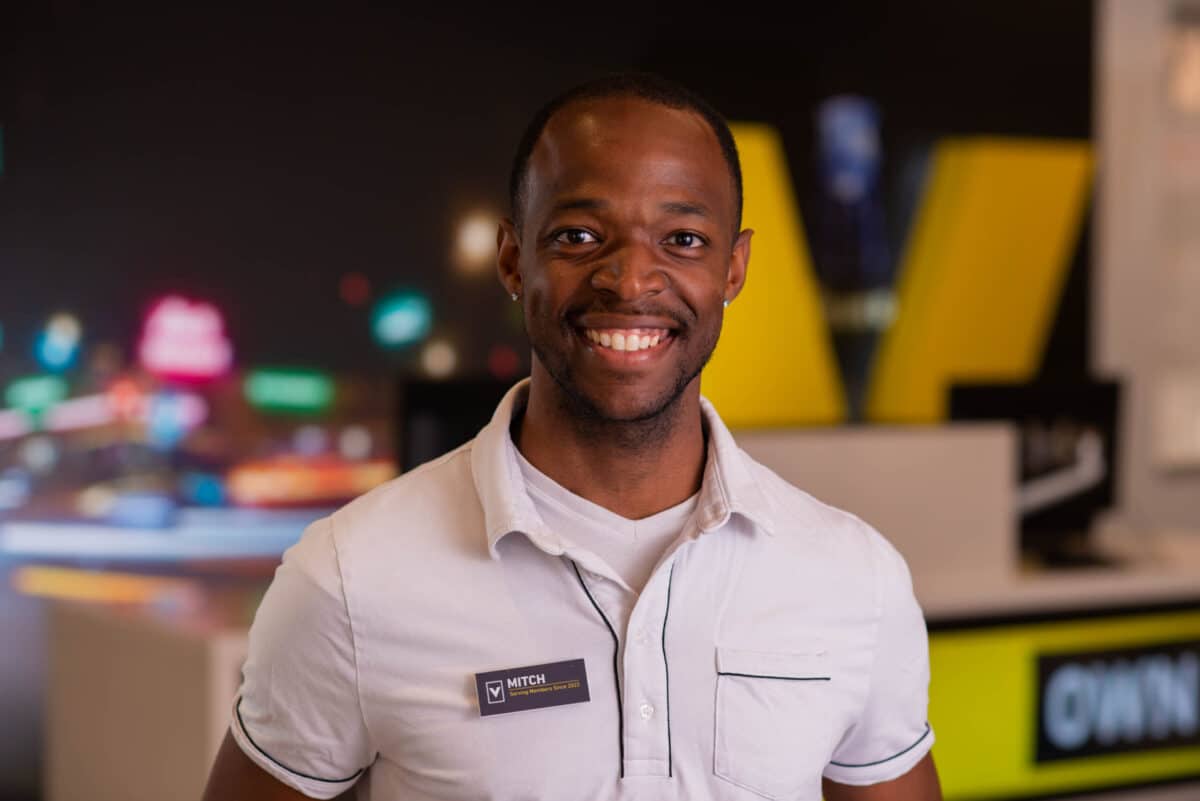 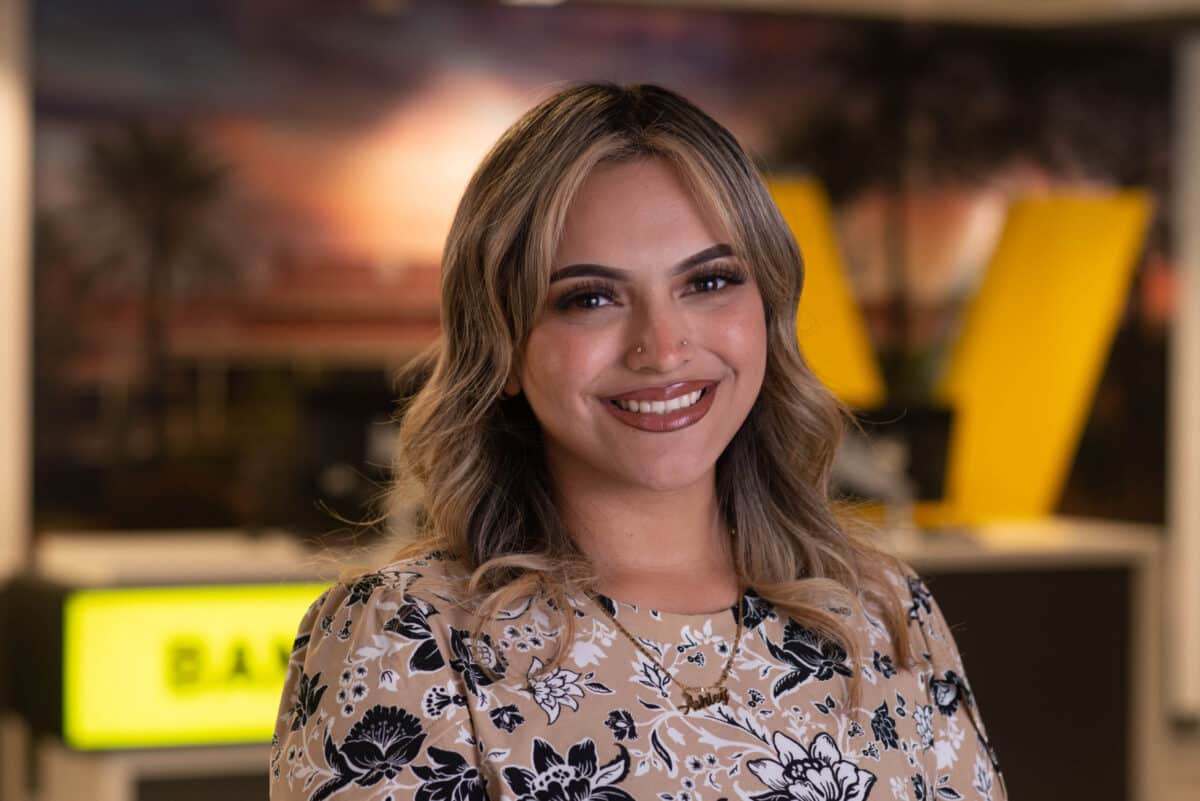 Personal finance isn’t typically the first thing we associate with art. In fact, the two can sometimes be perceived as diametrically opposed to one another, with artists often portrayed as types unconcerned with money. But for Tucson-based artist Karlito Miller Espinoza, the worlds of finance and art are linked throughout his life.

After Karlito’s family moved to Venezuela when he was child, Karlito’s father taught financial literacy, running a program that helped female entrepreneurs find loans. Being a “left-brained person,” his father was a bit wary at first about Karlito seeking a career in the arts. While he supported Karlito, he advised his son to choose an arts- related career with financial stability, such as engineering or architecture. But once Karlito began proving that he could make it in the art world, his father “started to piece things together.”

So when Vantage West needed a local artist to create a mural at the organization’s headquarters, it found Karlito’s mix of artistic skill and financial background to be fortuitous. Vantage West President and CEO Sandra Sagehorn-Elliott says that “Upon speaking with [Karlito] and looking at his work, we knew he would be an excellent partner due to his personal connection with financial literacy.”

Aside from the mural fitting with Karlito’s skills and experiences, the project also came at the perfect point in the artist’s life as he found himself in a period of change.

Before moving to Tucson, Karlito made a good
living in the DC area creating murals for well-known international brands. While the money was great, Karlito found the artistic side a bit underwhelming and the overall experience frustrating.

“A lot of times it was like pulling teeth,” Karlito says of his experiences working with big brands. “Rather than an original creation, it was more like having a tattoo artist trace an existing design.”

After finding this experience unfulfilling, Karlito relocated to Tucson to study at the University of Arizona (UArizona). In addition to furthering his education, Karlito was drawn to the relaxed lifestyle in Tucson compared
to DC, along with the area’s physical beauty and vibrant culture. In Tucson, Karlito “learned how to say no” to projects that didn’t align with his values and took on projects that were meaningful beyond a paycheck.

“I didn’t feel like doing the East Coast grind anymore,” he says. “In Tucson, I can say no to a project and not have to worry.”

NEW BEGINNINGS IN THE OLD PUEBLO

Armed with a renewed peace of mind, Karlito threw himself into painting and teaching. He completed his first Tucson mural in 2018 at the Historic Y building in downtown Tucson, following this up with murals located at John B. Wright Elementary School and the UArizona School of Art’s Joseph Gross Gallery.

These experiences allowed Karlito to create the type of “new muralism” that reflected “people of the community” rather than carrying out the wishes of a corporation.

But the perfect opportunity would arrive in 2021 when Vantage West Credit Union sought a creative way to unite their team during the difficult year.

“With dozens of corporate employees working remotely during the pandemic, preserving Vantage West’s culture became even more of a priority as we had fewer opportunities to gather in person,” says Sagehorn- Elliott. “With this mural, we were hoping to showcase our mission, values, and how important our community’s diversity is to Vantage West.”

Fortunately, through a partnership with the Museum of Contemporary Art of Tucson (MOCA), Vantage West found Karlito, an artist possessing a background as diverse as the community he was chosen to represent.

Born in Costa Rica and later growing up in Venezuela and Washington DC, Karlito absorbed the cultures, colors and communities that surrounded him, infusing his work with a concern for disadvantaged populations and a desire to tell their stories. As his work developed and Karlito found his voice, his mother was thrilled, getting to see her son succeed as a professional artist.

“Financial inclusion was a familiar idea to me, so I was psyched to work with Vantage West.”

“Everyone on my mom’s side were artists, but they always thought of it more as a hobby,” Karlito says. “Now she’s able to live vicariously through my work.”

The MOCA connection immediately piqued Karlito’s interest since it showed that Vantage West had an “interest in the arts.” Karlito was further drawn to the credit union’s mission of financial inclusivity, which harkened back to his father’s work in Venezuela.

“The message that ‘Banks Own You. You Own Us.®’ really resonated with me,” Karlito says. “Financial inclusion was a familiar idea to me, so I was psyched to work with Vantage West.”

FROM COMMISSIONS TO PARTNERSHIPS

Right away, it became apparent to Karlito that working with Vantage West would be worlds away from the dictatorial approach of the large brands he previously worked with. Vantage West sought inspiration from its employees, requesting images that “best represented the credit union and the communities it serves.” The images were shared with Karlito, who was given the freedom to further develop these ideas.

Karlito presented four iterations of the mural, a “nice and painless process” that led to the final design. The mural contains nine elements significant to Arizona’s history and the values of Vantage West. In addition to the credit union’s ‘V’ logo, the mural includes Southern Arizona’s iconic mountain ranges, wildlife, and vegetation.

This beautiful work of art will serve as a reminder of who we are and what we value for years to come.

The mural also portrays a small business owner and an Air Force uniform, underscoring the importance of locally-owned businesses and the credit union’s humble beginnings at Davis-Monthan Air Force Base. Finally, Karlito included images of Latina women and black cowboys, a nod to the diverse history of Southern Arizona.

For Sagehorn-Elliott, the mural stands as a lasting testament to the values of inclusivity and empowerment embodied by Vantage West. “Beyond increasing curb appeal, murals make art accessible to communities that may not have been previously exposed to it,” she says, drawing parallels to Vantage West’s mission of financial inclusivity.

Invest in Yourself: 6 ways to maximize everyday savings Read More

A Letter From Sandra Read More